Posted on March 12, 2011 by spiritualpakistanfuture
Allama Iqbal’s Letters to his Family

(Excerpts from Book: Zinda Rood by his son Javed Iqbal)
English Translation is below. 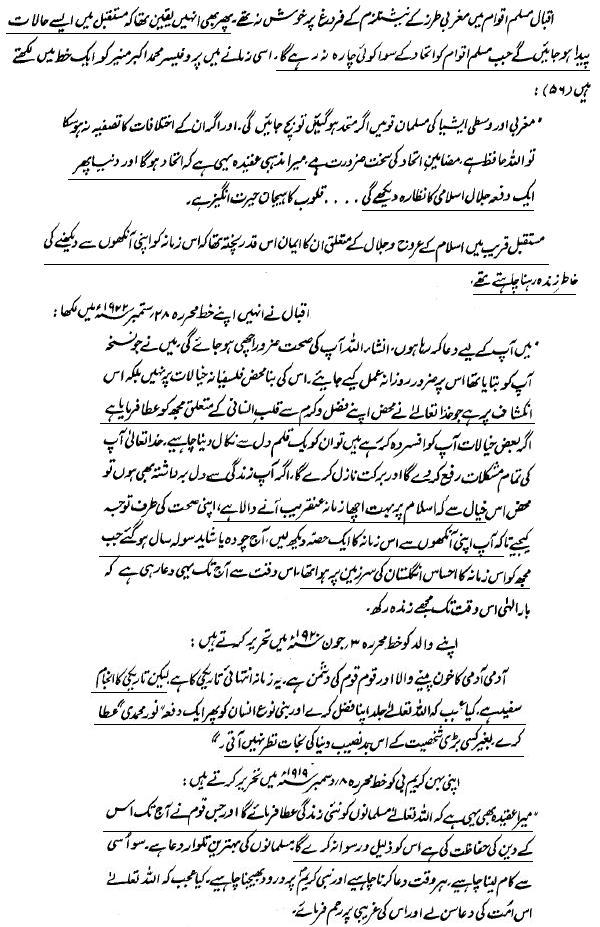 English Translation of Above Extracts:
Allama Iqbal was not happy on growth of western nationalism in Muslim states. Despite of this, he had a belief that such circumstances will be built in future when muslim nations will left with no option except to unite.

During this time(1920s), he wrote a letter to Prof. Muhammad Akbar Muneer:

“If Western and Middle Asian Muslim Nations  agree to unite then their survival will be possible and if their clashes couldn’t be settled then Good bye(chaos/turmoil) for them. Articles on unity are heavily needed. Its my religious belief that Mulsims will unite and world will view islamic glory once again. Excitement in hearts are amazing.”
Iqbal had so much faith about Islamic Renaissance and splendor  in near future that he wanted  to be alive for seeing that time with his eyes.
In 28 September,  1922, Iqbal wrote a letter to his brother:
“I am praying for you, your health will be better with the grace of God.  Keep using the treatment daily which I told u. It is not based on mere philosophical thoughts rather it on a sudden realization (revelation) which God has graciously bestowed upon me about human heart (innermost). If some thoughts are depressing you, then throw them out of your heart, God will take away your problems and will bless you. If you are still fed up of life then just a thought that a very good time is coming in near future for Islam, you should take care of your health so that you can see a part of that great era with ur own eyes. Its 14 or 16 years ago, when I realized that era in England’s land. From that time till now I am praying from God to give me life to see that era.“
In 3 June,  1920, Iqbal wrote a letter to his Father, he said:
“Man is hunting man and a nation is an enemy of other nation. This is darkest time ever but the end result of this darkness is white(bright). Whats strange if God will give his instant favor (to Muslims) and once again humanity be blessed with the divine light of Holy Prophet Muhammad(PBUM). Without a great personality, survival of this unfortunate world is very little (or can’t be seen)“
In 8 December,  1919, Iqbal wrote a letter to his Sister Kareem Bi, he said:
“ I too have this faith that God will bless Muslims with the new Life, and the Nation who has protected his religion till today,  he will never disgrace and demolish them”. Muslims’ best sword is Dua (pray to God) so it should be done all the time and Darood Sharif should be sent on Holy Prophet (PBUM). Whats strange, God listen to this Ummah’s Dua and do his mercy on their poverty”

This entry was posted in Allama Iqbal. Bookmark the permalink.

3 Responses to Letters: Unity of Muslims & Renaissance by Allama Iqbal