Hazrat Maulana Allah Yar Khan (R.A.) (Known as Hazrat Gee RA) was famous spiritual personality of 20th century and he was Grand Sheikh of Silsilah Naqshbandia Owaisiah. In 1974/75, he foretold the invasion of Russia in Afghanistan and predicted the disintegration of Russia. His many spiritual foretellings about Future of Pakistan and Ghazwa-e-Hind are mentioned in a book Hayat-e-Tayyiba.

“The boundaries of Pakistan will expand, big war with India will occur, Kashmir will get freedom, Delhi will be conquered. The victorious General will be our companion. At this success, he will be so happy that his heart will collapse and will not see his own victory.”

(Book references are given at the end of this post)
Note: At Page (433 & 434), Word ‘Jaioosh (جیوش)’ is used by Author, It is plural of Urdu word Jaish (جیش), meaning Army(Lashkar / Sipah) (Ferozsons Dictionary) 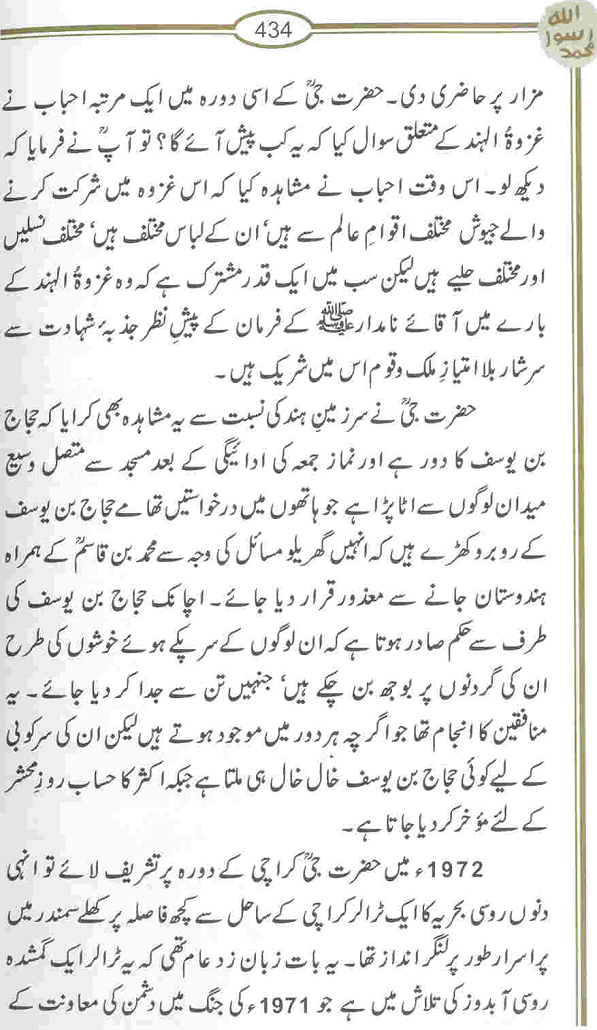 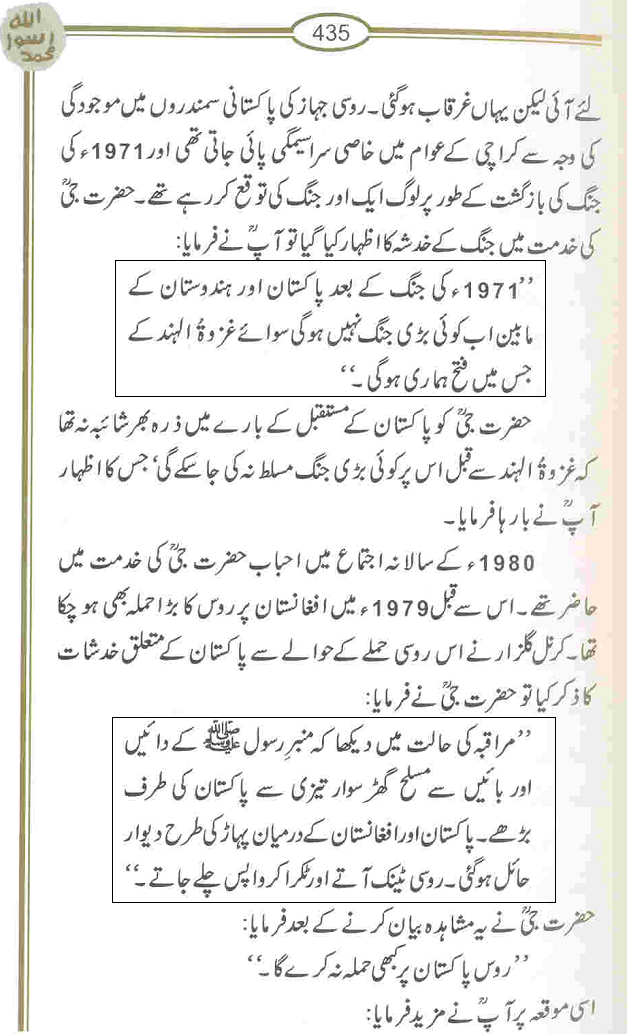 Hazrat Gee (Maulana Allah Yar Khan) stayed at Karachi from 19th of December,1970 till 24th of January,1971 because of not finding the flight for Jeddah.  At  that  time, the centre for ZIKR was also established at MAARI-PUR air-base.

When Hazrat Gee went to the place of aviation zikr companions at Maari-pur; there he heard the discussion related to Hazrat Abdullah Shah(R.A.), who was a renowned ‘SAHABI’.

Hazrat Gee marked out the particular place of Hazrat Abdullah’s burial, because his grave was extra-ordinarily long. He said that although his height was a bit taller than normal, but from his head side, the grave has been given extension unlogically.

“ I HEARD ABOUT GHAZWAT-UL-HIND; CAME HERE SO THAT IT MAY NOT PASS AWAY. WHEN REACHED HERE, MY LAST MOMENT CAME. ONLY FOUR MEN OFFERED MY FUNERAL.”

“ IN MY UMMAH, THERE ARE TWO SUCH FORCES, ON WHICH ALLAH HAS MADE HARAAM THE FIRE OF HELL; ONE IS THE FORCE WHICH WILL ATTACK HINDUSTAN & THE OTHER WOULD BE THE ONE WHO WOULD ACCOMPANY HAZRAT ISA IBN-E-MARYAM (A.S.)”.

“Hazrat Muhammad (P.B.U.H). promised us of Ghazwat-ul-hind. If I found this, then I would sacrifice myself & my goods, and if I died in it, then I would be one of  the best martyrs, and if I returned alive, then I ( Abu Hurairah) would be freed from fire.”

When Hazrat Abdullah Shah heard about the Hadees of Ghazwat-ul-hind; he left the country without any delay & headed towards the most renowned Hind-state of that time. Because he did not want to remain unrewarded regarding participation in this Ghazwa, about which Hazrat Muhammad (P.B.U.H). gave good news(basharat) of entering Heaven without any judgement.

Such type of good news came either in the destiny of lucky SAHABA in the era of Hazrat Muhammad (P.B.U.H.); such as ‘ASHRA-E-MUBASHSHARA’ or people of ‘BADR’ & now this reward would come in the fate of the participants of Ghazwat-ul-hind.

Ghazwa basically is a war in which the participation of Hazrat Muhammad (P.B.U.H). involves physically. It is strange that this Ghazwa has to take place after Allah’s Rasool S.A.W.  & more strange is  the happy news of entering JANNAT questionlessly, for its participants.

“COOL BREEZE COMES TO HAZRAT MUHAMMAD (P.B.U.H.) FROM THE COASTS OF HIND.”

From one aspect, Hazrat Abdullah Shah can be appointed leader of the passionates for participation in Ghazwat-ul-hind; as he left his country in this desire and is resting today at the sea-coast of MAARI-PUR.  This is the reason that Hazrat Gee regarded him and visited his Tomb on his invitation.

In the same visit of Hazrat Gee, some companions raised the question about Ghazwat-ul-hind that ‘ when would it be taking place?’

Hazrat replied;  “ YOU CAN WATCH “

Then companions saw through meditation that the passionates who are participating in this Ghazwa are from different world nations, different generations & are having different get-ups; but all are having one thing in common, i.e., they all are untidily involved in this Ghazwa, having deep desire of being martyred according to the sayings of Hazrat Muhammad (P.B.U.H).

Regarding the Hind-land, Hazrat Gee also made us see the era of Hajjaj bin Yusaf  i.e. , after prayer of JUMA, the broad area of MASJID is filled with people, who are standing in front of Hajjaj bin Yusaf with the applications in their hands, on which it is written that because of some private problems, they should be given disapproval of going to HINDUSTAN with Muhammad bin Qasim.

Suddenly, an order came from Hajjaj bin Yusaf that the heads of these people have become load on their necks like ripped bunches, which must be get separated from the entire body.

It was the result of dual intenders (munafiq), which are present in all eras. But for their removal, strong Hajjaj bin Yusaf is being found rarely. Whereas judgment of many gets delayed for the day of  judgment.

In 1972, Hazrat Gee came to visit Karachi. In those days, a troller of Russian Navy was anchored hiddenly in an open sea near few kilometres of Karachi coast. It was on every one’s tongue that this troller is in search of a Russian Sub-marine, which came in war of 1971 to assist the enemy, but got drowned here.  Because of the presence of Russian ship in Pakistani Seas, there prevail a lot fear in the people of Karachi & they were expecting another war because of 1971 war.

When the possibility of war was discussed in front of Hazrat Gee, he said;

“After The War Of 1971, There Would Not Occur Any War Amongst Pakistan & Hindustan Other Than That Of Ghazwa tul Hind; In Which The Success Would Be Ours.”

Hazrat Gee was not having any doubt about the future of Pakistan, as no other big war would be imposed on Pakistan before Ghazwat-ul-hind; of which Hazrat Gee mentioned many times.

In the annual gathering of 1980, companions were with Hazrat Gee. Just before, in 1979, Afghanistan was been attacked by Russia badly. When Colonel Gulzar discussed fear about Pakistan regarding this Russian attack, Hazrat Gee said:

” I Saw In State Of Meditation (Muraaqba), That From The Right & Left Of ‘Minbr-E-Rasool(S.A.W.)’, The Horse Riders Headed Fastly Towards Pakistan. A Wall Appeared In The Centre Of Pakistan & Afghanistan, Like A Mountain. Russian Tanks Did Come And Bounced Back After Collision With It.”

“The Boundaries Of Pakistan Would Expand, Big War With India Would Occur, Kashmir Would Get Freedom, Delhi Would Be Freed. The Victorious General Would Be Our Companion. At This Success, He Would Be So Happy That His Heart Would Collapse And Would Not See His Own Victory.”

According to this statement of Hazrat Gee, that now, before Ghazwat-ul-hind, there would be no war occurring between Pakistan & Hindustan; the good news of victory can only be of Ghazwat-ul-hind.

Furthermore, being a GHAZWA, it would be having the leadership of  Hazrat Muhammad (P.B.U.H) due to His full attention; and how from BARZAKH, it would take form of personal companionship , ALLAH knows.

Hazrat Abdullah Shah was also waiting for the time that when Ghazwat-ul-hind would start and he would participate in it, although spiritually.

While our visit to his TOMB, he said that he would be the part of Ghazwat-ul-hind & Hazrat Abu-Hurairah(R.A.) as well.

Till then, Hazrat Abu Hurairah’s saying about this Ghazwa was not known. When found his sayings, then it came in front that he also desired deep for participation in this Ghazwa.

It came to be known that any person who died along with the desire of participation in Ghazwat-ul-hind; he would also be spiritually, the part of this Ghazwa because of his intentions.

Whatever the form of participation would be; the certificate for Heaven’s entrance without any judgment has been received. But the real good luck for its participants would be to have the supreme attachment with MUHAMMAD (P.B.U.H.), because of this GHAZWA.

This entry was posted in Maulana Allah Yar Khan RA. Bookmark the permalink.