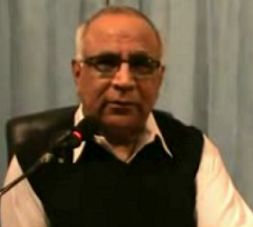 Note: Islamabad: Eminent poet and Naatkhwan Bashir Hussain Nazim passed away here on Sunday (17 June, 2012) due to cardiac arrest at the age of 75. He was laid to rest at the H-11 Grave. He felt chest pains when he got back home and was taken to Combined Military Hospital, Rawalpindi, where he breathed his last. (Read more here)

A Tribute to Bashir Hussain Nazim Sahib, article on his death, published in Nawa-i-Waqt. (Read here)

This entry was posted in Syed Sarfraz Ahmad Shah. Bookmark the permalink.